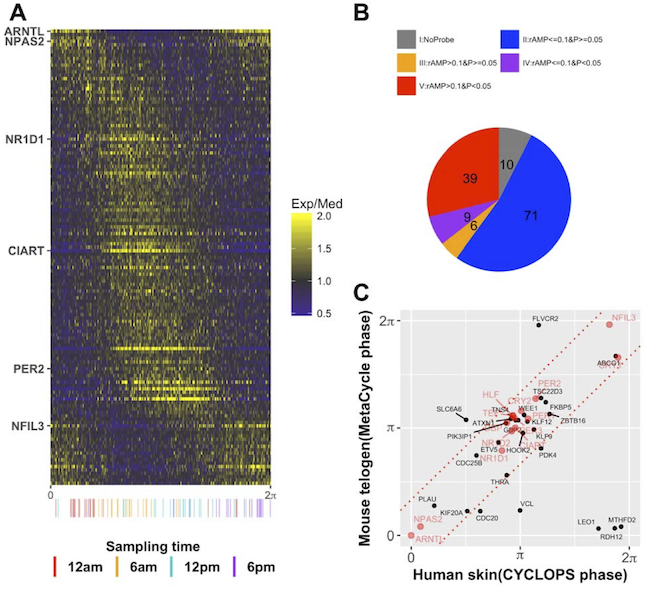 Population-level rhythms in human skin with implications for circadian medicine

Proceedings of the National Academy of Sciences of the USA (2018)

Skin is the largest organ in the body and serves important barrier, regulatory, and sensory functions. The epidermal layer shows rhythmic physiological responses to daily environmental variation (e.g., DNA repair). We investigated the role of the circadian clock in the transcriptional regulation of epidermis using a hybrid experimental design, in which a limited set of human subjects (n = 20) were sampled throughout the 24-h cycle and a larger population (n = 219) were sampled once. We found a robust circadian oscillator in human epidermis at the population level using pairwise correlations of clock and clock-associated genes in 298 epidermis samples. We then used CYCLOPS to reconstruct the temporal order of all samples, and identified hundreds of rhythmically expressed genes at the population level in human epidermis. We compared these results with published time-series skin data from mice and found a strong concordance in circadian phase across species for both transcripts and pathways. Furthermore, like blood, epidermis is readily accessible and a potential source of biomarkers. Using ZeitZeiger, we identified a biomarker set for human epidermis that is capable of reporting circadian phase to within 3 hours from a single sample. In summary, we show rhythms in human epidermis that persist at the population scale and describe a path to develop robust single-sample circadian biomarkers.