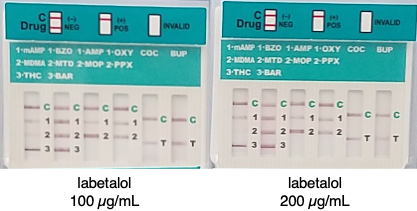 Point-of-care (POC) urine drug screening (UDS) assays provide immediate information for patient management. However, POC UDS assays can produce false positive results, which may not be recognized until confirmatory testing is completed several days later. To minimize the potential for patient harm, it is critical to identify sources of interference. Here we applied an approach based on statistical analysis of electronic health record (EHR) data to identify medications that may cause false positives on POC UDS assays. From our institution’s EHR data, we extracted 120,670 POC UDS and confirmation results, covering 12 classes of target drugs, along with each individual’s prior medication exposures. Our approach is based on the idea that exposure to an interfering medication will increase the odds of a false positive UDS result. For a given assay-medication pair, we quantified the association between medication exposures and UDS results as an odds ratio from logistic regression. We evaluated interference experimentally by spiking compounds into drug-free urine and testing the spiked samples on the POC device. Our dataset included 446 false positive UDS results (presumptive positive screen followed by negative confirmation). We quantified the odds ratio of false positives for 528 assay-medication pairs. Of the six assay-medication pairs we evaluated experimentally, two showed interference capable of producing a presumptive positive: labetalol on the MDMA assay (at 200 μg/mL) and ranitidine on the methamphetamine assay (at 50 μg/mL). Ranitidine also produced a presumptive positive for opiates at 1600 μg/mL and for propoxyphene at 800 μg/mL. These findings highlight the generalizability and the limits of our approach to use EHR data to identify medications that interfere with clinical immunoassays.